Having spent countless years in and out of hospital wrestling with her illness, Libby is now turning this experience to good use. She has recently finished her studies to become a wellness coach to help support others grappling with mental health issues.

Libby attributes her competitive streak with her twin sister, Maddie, for triggering her mental illness, which led to the tragic loss of her childhood and teens.

Having spent years waging a battle against anorexia nervosa, Libby has chosen to volunteer for the NZ arm of the Eating Disorders Genetics Initiative (EDGI), to help researchers identify the genes responsible for eating disorders, in order to transform thousands of lives for the better.

This is Libby’s story.

Libby was only eight years of age when she began to experience symptoms of depression and suicidal thoughts. Mistakenly considering herself to be the “inferior twin”, Libby identified weight loss as something she could excel at.

By the age of 11, and on the brink of death, Libby was hospitalised, with a feeding tube placed down her throat in a desperate bid to keep her alive.

“Being a twin, I always compared myself to my sister. I began to believe that I wasn’t as good as Maddie, and that everyone preferred her. Then one day I had this great idea, that if I could lose weight, that would be something I could be better at than her.

“But my weight loss saw my mindset change. I took my controlled eating to the extreme, and spent years obsessing over my diet, and living in a world where nothing else mattered,” said Libby.

Libby’s teens were tumultuous, as she worked tirelessly to juggle her illness with going to school, and trying not to worry about what her peers were thinking of her.

“By the time I was well enough to start secondary school, my sister was already there. I felt like I was coming in as the anorexic twin, because I could only manage half days, and was still way below my goal weight. So it was pretty obvious that something was wrong with me.

“As I got older, I wanted to put it all behind me and focus on my studies. But anorexia nervosa still ruled my life most of the time. I had to practice eating out in social situations, and sometimes I couldn’t face going to parties and would stay at home crying for days at a time,” Libby said.

“Anorexia nervosa completely consumes you, and gives you sleepless nights full of torment.
It sucks your whole life away, and you have to literally rewire your brain to escape it.”

Armed with unwavering love and support from her twin sister and parents, Libby finished her studies and recently moved from Auckland to Wellington with her partner.

“Although I still find it difficult to ask for help, my family has been amazing along the way. They have all supported me for so many years.

“I don’t think I’d still be here today, if it wasn’t for Maddie. She’s been my number one supporter, and I like to think I’ve been hers, given she too, has battled anorexia nervosa,” said Libby. 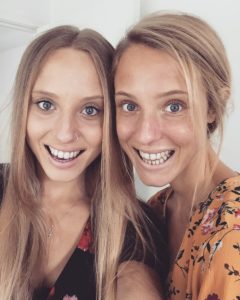 “Now I just want to help other people. That’s why I’m training to be a wellness coach, and to share my experience on social media.

“If I can save one person’s life, it will all be worthwhile,” Libby said.

Given their own personal, and their family’s devastating experience with anorexia nervosa, both Maddie and Libby are passionate participants in the NZ arm of the Eating Disorders Genetics Initiative (EDGI) – the largest and most rigorous genetic investigation of eating disorders ever performed.

“Both of us had to grow up much faster than most, and it was 10-times harder for us trying to figure out who we really were in those important, formative years.

“I wouldn’t wish anorexia nervosa on my worst enemy. That’s why I’m so passionate about learning why and how eating disorders take hold of certain people,” said Libby.

“If this research can identify the genes responsible for eating disorders, it should save thousands of people from having to experience the trauma that my sister and I have gone through.”